Today was my first day of observations. At 12:50-2pm I observed a preschool class - well, three of them. It looks like those classes will just be story-time and basic games. At 2pm I met with the head Korean teacher, and she gave me a tour of the school. After that I went home, dropped off my bag, and went exploring again. I found a great bakery where I bought a sandwich, and a 7-11 where I bought lobster chips and these little seaweed sandwiches. I haven't had the seaweed sandwiches yet, but the lobster chips simultaneously tasted bland and extremely lobstery.

After lunch I went back to the school, where I observed two elementary classes (I'd say 6/7 year olds) with one teacher, and another two classes (maybe 8 and 5 year olds) with another. At eight I finished up and went home. I just finished eating dinner - ramen, lobster chips with ketchup, and Chilsung Cider - and watched an episode of The Good Wife, and now I'm contemplating going to bed. It's only 9:20, but I'm still tired!

Some things I've learned how to do:
- I figured out how to use my stove! It's just two burners, but you need to turn the gas on and start the burners with a firestarter. One guy I know uses a chopstick. (Not, er, exactly safe, but if it gets the job done...)
- I can read 4 consonants and 10 vowels of Hangul (the Korean alphabet)! I'm going to try adding another seven letters a day until I've learned them all.

These lists will continue in future posts, I'm sure.

Click here to view all of the photos I've taken since I've gotten to Korea. And just for fun, I'll post a couple pictures below.

Here's a photo of me with a really creepy dancing Santa Claus: 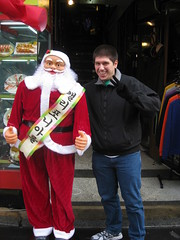 And a photo of Anime Jesus from the front window of a school: 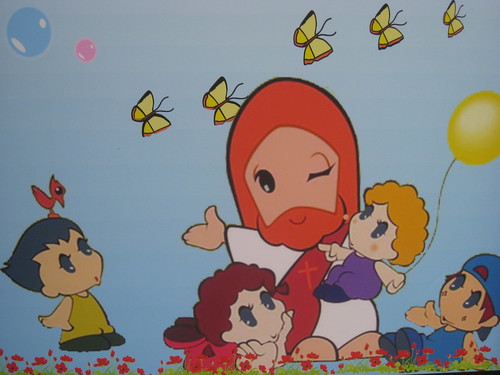