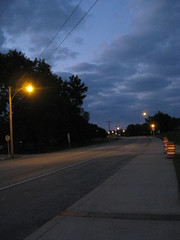 6am, walking home from work

Got home from work at 6:20, promptly passed out and slept until 11. Later went to campus. Had Russian Drama at 1:30 - more Russian Lit, oh boy! After class, I talked with Jeff & we're probably going to get together to do some studying for my placement test. (He did 4th year Russian last year and then studied in Moscow this summer, so he's definitely more advanced than I am.) We're also going to look into starting a Russian conversation group. Hopefully we'll actually go through with it.

I finally got around to uploading pictures of my apartment. I'm actually too lazy to fiddle with the img src code and whatever, so here's a link to my flickr account. Later I may actually post them on here, but for now that's as good as it's going to get.
Collapse